A story for demonstratives

I’ve come up with a story that in both Spanish 1 and 2 has worked really well with teaching demonstratives. We’ve worked with those quite a bit for the past couple of weeks, and I’ve been amazed at how fast my students have become consistent and proficient at using them.

Side note: A couple of veteran Spanish teachers and I were talking recently, and they were remarking how 1/2 hour once per week (our middle school Spanish schedule) is a complete waste of time. I said I thought it was of some benefit, because I could see how my Spanish 1 students came in to my class after 3 years of that schedule and were advanced in their ability to use verbs like soy and estoy. One of the teachers said, “Oh, you can teach that in two days.”
Yes, you can teach it in two days. But the students will not use it consistently accurately after that. They just flat won’t. This is what’s wrong with us–we care more about moving through material than we do about whether our students can use the material. I had a Spanish 3 student with very high aptitude write yo tiene on his blog last week and I could have smacked him. What is our goal here, finishing a book? Assigning a grade? Or enabling them to communicate with hundreds of millions of people who have something to teach them about life and the world?

Okay, so the story:

There is a girl, her name is Goldilocks, she has blond hair and she’s however old the students decide (reviewing beginner phrases). She’s wearing a (color) dress. Is she sad? No, she’s happy. She has a friend, her friend is an animal, he’s a little bear, and his name is Charlie.

(I draw these two on the left side of the board, and then draw three long arcs at about equal widths across the board to indicate space close to them, a bit farther, and farthest away.)

We just did this in Spanish 1 because we’re working on kitchen/food vocabulary, but you can use anything. In Spanish 2 we were working on dropping the noun to get esto, ésos, etc, and we used gorra, pantuflas, and something else that escapes me at the moment.

Believe it or not, once you’ve gotten high-schoolers to accept the fact that where a second language is concerned, they’re like kindergarteners, they’ll tolerate just about anything–including nursery rhymes! 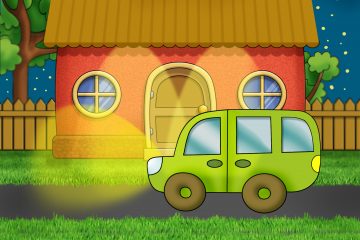