Seeking the future of world language learning at the intersection of comprehensible input, project-based learning, global education, and love.
Resolutions 2017: Do something empathetic
Sara-Elizabeth Cottrell January 24, 2017

Shall we talk politics?  Everyone else is, so, why not.  But wait a minute.

There’s quite a bit of politics in this post that’s not about politics.  So, I should start here: what is it about?

A call to meatloaf – I mean, empathy

As 2016 turned into 2017 and the most divisive spirit most of us have ever felt in our country continues unabated, I resolve this year to implement systems that help me build up my empathy muscle, and I invite you to do the same.  I resolve to do it in many ways, simple to difficult.

To start with, I made meatloaf last week for the first time in my life.  I despise meatloaf and I don’t make my family food that I hate.  So my children have never had a tuna fish sandwich.  We never have olives in the fridge.  And my kids were introduced to meatloaf at their grandfather’s hands last fall and they loved it.  I realized I wasn’t being empathetic to march onward only serving my kids foods I like.  So I made meatloaf.  (They liked Granpap’s better.)

What about language teaching?  Have we shown a marked lack of empathy here, too?  There is division splashed across Facebook groups, Twitter hashtags, radio chat feeds, and even my email every day.  It’s ugly.  The positive path is one filled with empathy, I feel sure.  But how?  Here are some ways I want to be empathetic this year.

I will talk to the person, not the pedagogy.

I heard this fantastic quote last week from a brilliant guy who has dedicated most of his life to respectfully arguing with people who disagree with him:

I’ve found myself too many times caught up in the content of the conversation instead of the people in it.  Real people with real questions and real problems.  And yeah, maybe real “mistakes,” like the ones I make or maybe different, but I’m not talking to mistakes.  I’m talking to people.  And talking to people ought to involve a lot more “I’m pulling for you” and a lot less “I need to be right on this.”

I will take the other for lunch, not a lecture.

When’s the last time you went out for lunch with someone on the opposite side of any issue that was really important to you? 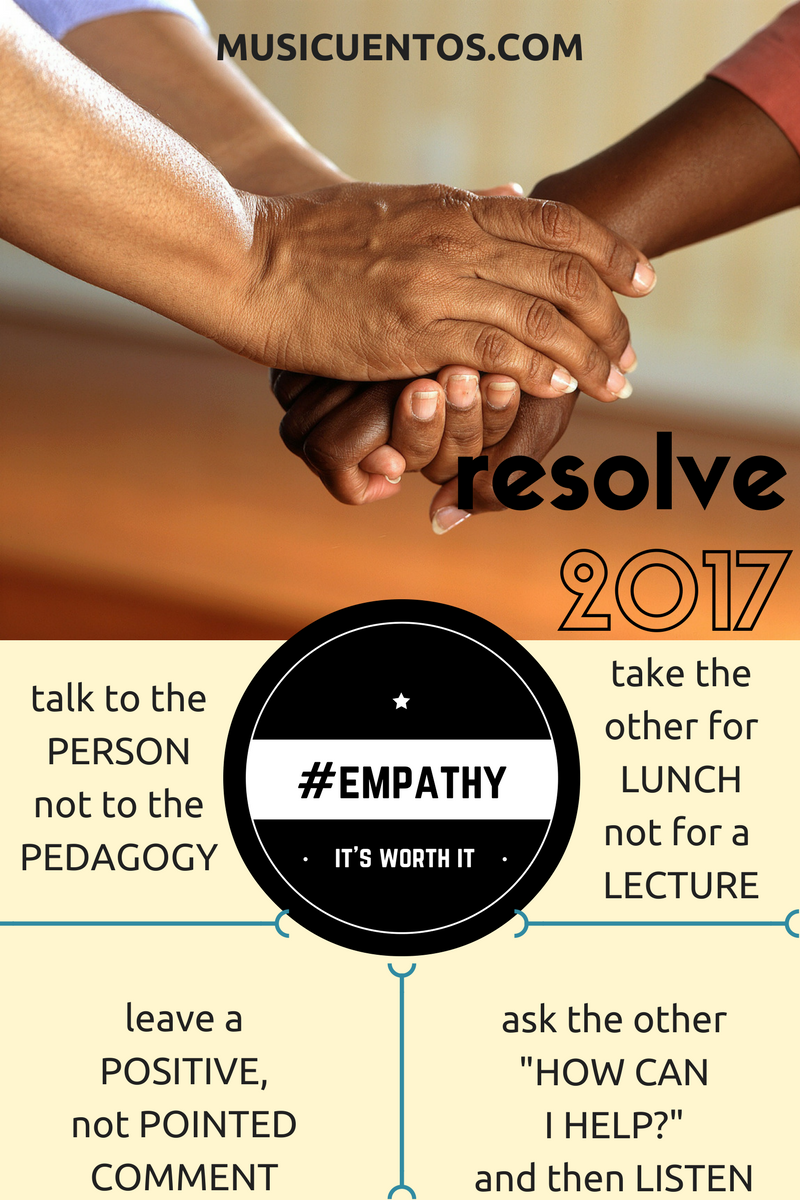 Here’s an interesting challenge for us:  what if we looked on TeachersPayTeachers or Twitter or the blogosphere for a post or product or practice that we mostly really disagreed with, found something positive to say about it, or about the person who shared it, and then encouraged them?  Just because I’m not going to encourage what I think is bad pedagogy doesn’t mean I can’t find and encourage signs of growth and generosity to the teaching community.

I will browse the other chat/website/Facebook group.

Let’s be honest- we do tend to feed our opinions with others mostly siding with us.  I don’t want to keep myself in a bubble of people who think like me, though. It makes me blind.  It makes me mean.  I want to know what other, real, precious people are saying and thinking and why.  I regularly listen to the TED Radio Hour even though last week was the first time in a year and a half that I heard a single speaker say anything about God (or much of philosophy, really) that I agree with, but I think it’s made me a better member of society to listen to all the fascinating things people I disagree with are doing and saying.

So how do we do this in language teaching?  Join a chat on Twitter for a night.  Engage someone in a pleasant conversation when you knew from the start they were on a different “proficiency path” than you.  Sign up for their blog posts- and then read them.  Regularly.  Join the Facebook group (if it’s not a whole lot of conflict, that is – I don’t have a lot of stamina for that).

In the last couple of weeks I had someone ask me via Twitter to take a look at something, and I discovered he’d been snubbed from the conversation, shut out by the Proficiency Preachers because, I don’t know, his tweets or profile or something smelled of something less than the Proficiency Party Line.  What a shame.  I want to remember that even people I disagree with have something to teach me, and I’ll come out a better teacher for it.

I will ask how I can help.

Let’s say I’m a teacher who doesn’t do verb conjugations or vocabulary lists but I work with one who is, and my students often leave my class and enter his.  What if I went and asked him how I can help him succeed?  What if I asked him,

Would it change your relationship?  Your department?

Would it lead to him asking you the same thing in return?

And now, backing off of language teaching for a moment, what would happen in our country if we tried a little more empathy with people who really tax our sense of who’s worthy of it?

Do I tax your empathy?

At the Central States conference last year, I was in a room with five other female teachers when the conversation turned to the election and why I would not support either Clinton or Trump.  And so, the conversation turned into an hours-long, emotional marathon on the subject, mostly, of abortion.  You can probably guess how that turned out.  We all separated, barely speaking to each other, and have determined we’ll never associate with each other again.

No, we didn’t.  We said good night and went to bed and still communicate regularly.  I have most of those women on a perpetual group text message, in fact.

At ACTFL ’16 I ended up at lunch with four old and new friends – each one of them leaning left and from that hotbed of recent conflict known as North Carolina.  The conversation turned to politics, and in pretty short order I felt the need to announce, “I should probably tell you that I’m a Republican.  An unhappy Republican (I proudly voted for Evan McMullan) but a Republican nonetheless.”

You can guess how that turned out.  They gasped and whipped out their “Love Trumps Hate” signs and told me I was never welcome to lunch with them again.

No, they didn’t.  The conversation turned markedly less dogmatic and markedly more “Hmm. The people on the ‘other’ side of the aisle don’t fit in the mold MSNBC/Fox News paints for me.”

If you’re on the left and you’re not sure where to find the “other” to have a dialogue with, you’ve come to the right place. It’s no secret that I’m an evangelical Christian.  And you may have already guessed or known that I am pro-life.

But wait… how pro-life?

I’m not shy about it: I am what some would call rabidly pro-life.  I’m not picketing or yelling outside a clinic, but really, I mean, almost.

But you know what?  My husband won’t get it for me and doesn’t want me to get it either.  He says it’s too angry.  It’s not empathetic.  (I’m a strong woman made stronger by an insanely strong marriage.) I think he’s probably right.

Can you find empathy for a woman who would wear a t-shirt with this design?

What if I bared my beliefs even more?

What if I willingly exposed my associations, because guilt by association is all it takes for people to devalue your public voice on anything from language teaching to remodeling houses these days?

What if I told you that when Al Mohler has a tech glitch and can’t get his Daily Briefing podcast to upload, my husband is the one who gets the phone call to fix it and make sure the world continues to hear Dr. Mohler’s voice?

Can you find empathy for me?

Ok, so what?  Is this a really a cleverly disguised politics post on Musicuentos?!  No, not really.  Chances are I won’t comment on many talking points at the intersection of religion and politics (except I mean, I just did on abortion…), and certainly not here, unless we agree on what is known as the Gospel, because otherwise the discussion is pointless.  Whatever it is, it’s a corollary to the foundation of what I believe.  As the president of the Ethics and Religious Liberty Commission said in an OpEd in The Washington Post,

We believe stranger things than that. We believe a previously dead man is alive, and will show up in the Eastern skies on a horse. We believe that the gospel can forgive sinners like us and make us sons and daughters.

I believe in loving and respecting all people and asking them to do the same for me.  I do believe that means I am not allowed to hate you, exclude you, speak condescendingly to you, say nasty things about you, or teach my children you’re anything less than they are.  I don’t believe that means, above all, that either one of us has to believe the other person’s definition of the path to eternal peace is valid.

I don’t know what you and I agree on, but I think we can all agree that our country and our profession could use some more empathy.  Would you try these systems with me to implement that goal this year?

If you’ve stuck with this post for this long, thanks for taking the time to listen.  I feel your empathy.  (If you’re invested enough to listen more, you could explore 10 things [we] wish everyone knew about Southern Baptists.) 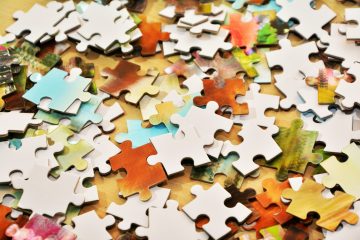 Resolved with a Plan 2019: Stuck rabbits, changing puzzles, picking up a paintbrush January 4, 2019 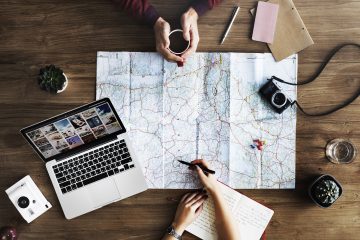 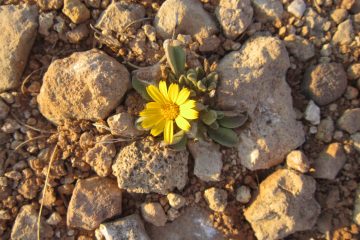