Seeking the future of world language learning at the intersection of comprehensible input, project-based learning, global education, and love.
Yes, some people are “good” at languages. So what? (Black Box)
Sara-Elizabeth Cottrell May 22, 2017 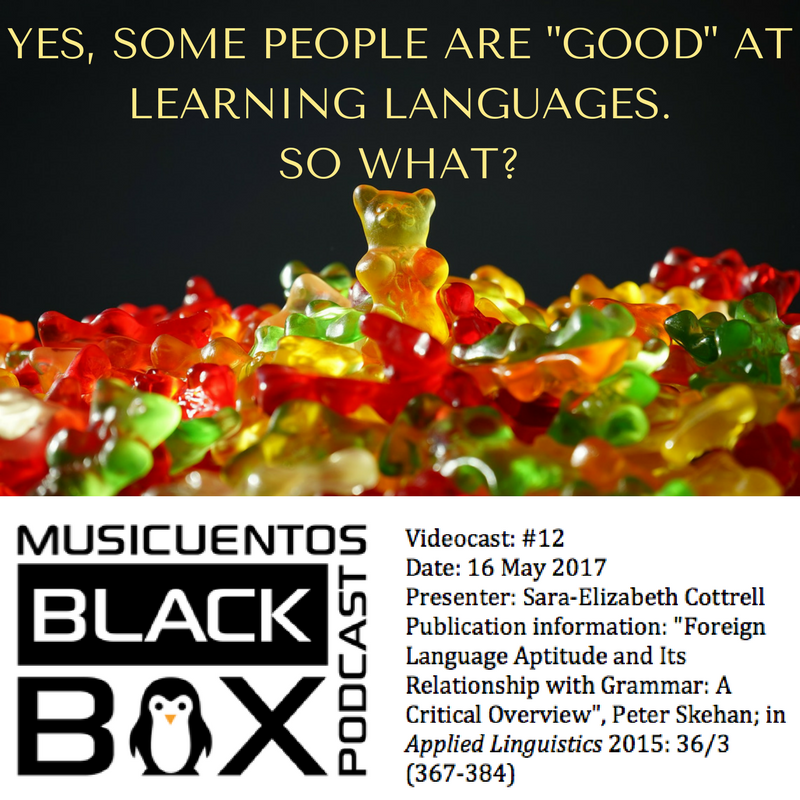 I’m betting you hear this as much as I do:

“Oh, you’re a language teacher?  I wish I could speak (X).  But I’m just no good at learning languages.”

I’m also betting many of you have answered the way I have.  It’s not about being “good” at languages.  If you’ve acquired a first language, you’ve proven you’re as capable as anyone else at acquiring a new language.  It’s probably because you didn’t have someone that exposed you to the right kind of input.

Now I laugh at that black-and-white viewpoint in my former self.  Yes, anyone who has acquired a first language can do so again. But there are so many other factors.  There’s motivation.  There’s how much time you have.  There’s how old you are.  (Yes, that does actually matter.)  And, relevant to this final Musicuentos Black Box Videocast, there’s aptitude.

Yes, some people are actually better at learning languages than others.  And we’ve known it scientifically for decades.  Everyone who doesn’t have a brain impairment can learn a second language, but some people have higher aptitude, some mysterious collection of abilities that help them learn it faster and be more native-like when they’re “done.”  You’ve met them.  If you’re reading this, you probably are one.

So what does it have to do with grammar?

To better understand language aptitude and find out what it could mean for your students and classroom, check out this 12-minute video explaining a recent article by an aptitude expert over in England, Peter Skehan.

By the way, you did read that correctly above – this is the last installment of the Musicuentos Black Box Podcast.  It was an idea that was important to me, but there’s simply too much work to be put into each video to make this a realistic project, even with a team, particularly when we all have real jobs and real families on the side!  I sincerely hope this 12-video collection has helped and continues to help teachers understand second language acquisition research and the possibilities and limitations of applying it in the classroom.