Seeking the future of world language learning at the intersection of comprehensible input, project-based learning, global education, and love.
Reflections on our AAPPL experience
Sara-Elizabeth Cottrell May 21, 2019

You teach, you input, you provide experiences, you assess, you re-assess, you plan and prepare and teach again.  At some point, I think we all wonder deep down – what if someone else were assessing them?  What would the results be?

I’m adamantly against such middle school showmanship reflected in tactics like the hashtag #showyoumine because individual differences are so strong and context makes such a difference, everything from what town you teach in to whether the learner ate breakfast that morning.  But that doesn’t mean it’s not helpful to show each other evidence of what learners are doing; it just means maybe since social media is rather like a middle school bathroom, that isn’t the best place to do it.  These conversations happen best as conversations – I can ask you about specific contexts, you can ask me, we can brainstorm what might be done with this information.  So gather around, and let’s have a conversation about my learners and the AAPPL tests. 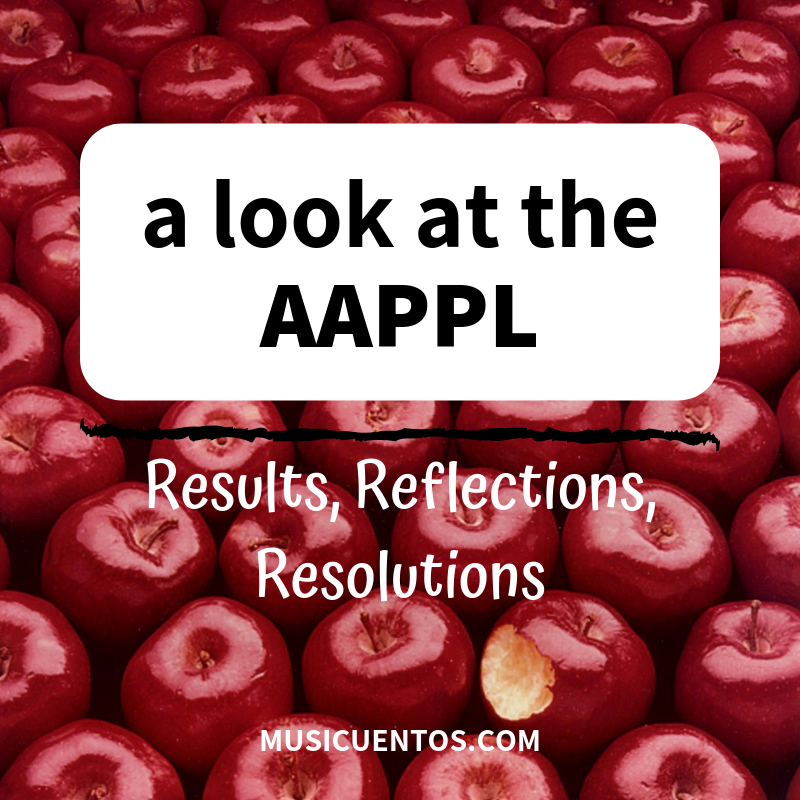 AAPPL stands for the ACTFL Assessment for Performance towards Proficiency in Languages.  It is a topic-specific performance assessment.  The topics are released ahead of time, and learners and teachers can interact with demonstrations of the test.  It’s not technically a proficiency assessment, rating learners on what they can do on the street in an unrehearsed setting, but rather a performance assessment, evaluating practiced language learned in (usually) a classroom situation (though there are many heritage speakers that take it for various credit reasons).  Actually, I like to think of it as a hybrid – you generally know the topic ahead of time, but you don’t know the specific prompts.  So learners can get an idea but still need to think on their feet, so to speak.

Let me make a side note here: as of March, I am actually a rater for the AAPPL.  Going through the application and training to be an AAPPL rater was an invaluable experience, and gave me great insight into how to assess language on a performance assessment.  I’ve learned a lot from rating hundreds of AAPPL tests, but that’s a conversation for another day.

Reflections from the PLN

Way before I got involved with the AAPPL, Laura blogged about her analysis of AAPPL results and other strategies, including developing writing prompts and making DIY listening assessments.  This year, after she attended Laura’s workshop at a state conference, Allison administered the test to her learners and blogged her reflections here.  Their sharing inspired me to share our experience as well, in case it will help you.

To prepare or not prepare?

First, I’ll point out that it didn’t occur to me to really prepare my students for the test.  We were moving through our Spring unit as usual, and we kept going.  Our preparation consisted of me handing out the list of topics, adding someone else’s Quizlet to our class and sharing that out, and using the online demo to show my learners how the drag-and-drop interpretive sections work.  This took approximately three minutes at the end of a class.  Oh, and because I know how critical it is to ask a question when you’re told to ask a question on intermediate prompts, we did brainstorm all the ways someone might say “ask me a question about…”.  In all I’d say my part of their preparation lasted less than 10 minutes.

I’ve thought about this, and I don’t have a strong opinion one way or another on test prep, but I think I’ll gently suggest you resist any temptation to prepare learners for the test, unless perhaps you have someone who rarely interacts with technology.  It’s so hard to take our hands off the motivation steering wheel, but I truly believe this is all on the learner.  I did my part.  Also, I think that by not making a big deal out of the test (like really not a big deal) it helps the kids relax about it.

When I went to conferences, sometimes I had a substitute, sometimes not.  And heaven forbid snow fell on a Friday!  But let’s say they were there every time, and I was there every time.  That gave us a maximum of 48 hours of contact time in a school year.  (So if you have students five days a week for 50 minutes, it took me three years to get to your level of contact time.)  I assigned at-home activities via Edmodo, but since I didn’t give grades, I really had no leverage except moms pestering them.  Everyone did some activities.  Some did almost all, and some did almost none.

And the results are…

Now let’s see the results.  These are bar graphs representing the ratings received by my 9 learners who took all four of the AAPPL tests. 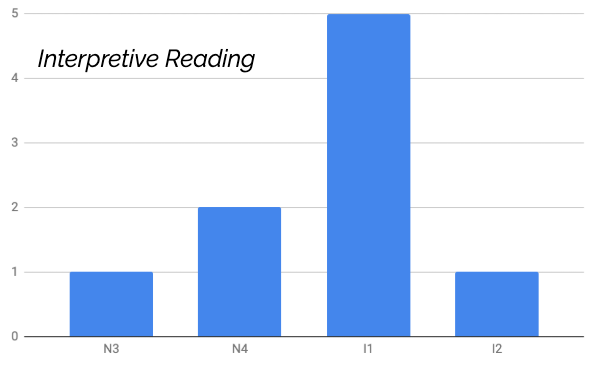 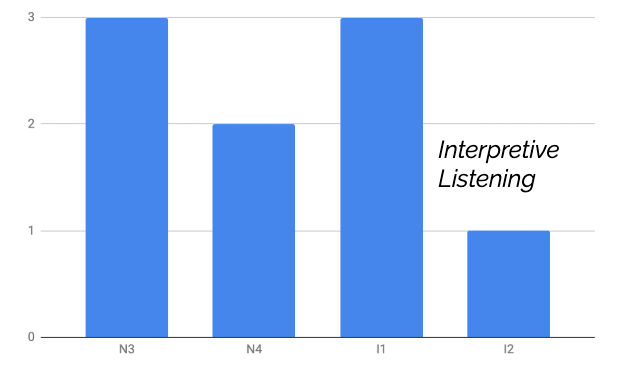 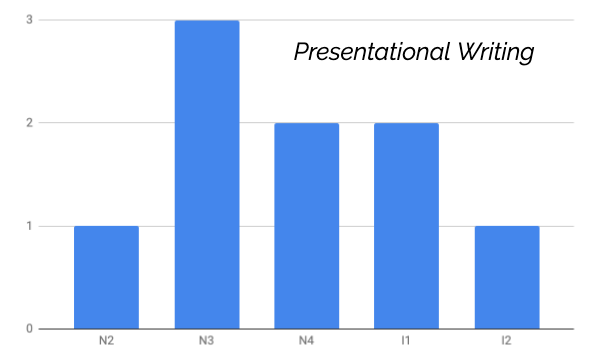 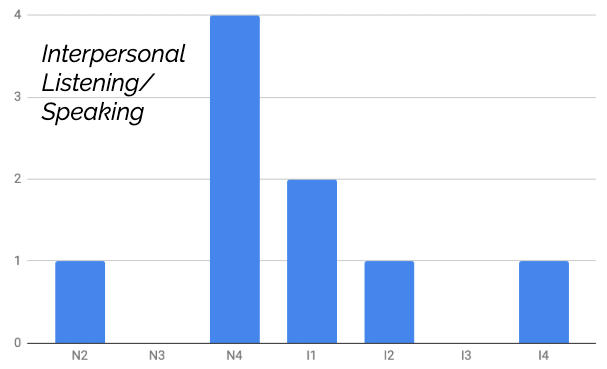 The takeaway: it’s not personal

Individual differences are real.  Accept that not only because it’s true, but because it should take a weight off your shoulders.  After the test, I was surprised at how many parents asked me if I was happy with the results.  I’m actually rather indifferent.  The results are data to me; they’re not validation or condemnation.  They’re evidence of how far these girls have come with the effort we jointly put into it.  I provided many experiences to foster acquisition and a love for the Spanish-speaking peoples and their cultures.  I didn’t do my best, but I believe it’s wrong to do the best you can.

Knowing this means you cannot take these scores personally.  When I see the I4 in speaking, I have no idea why that happened.  I can’t explain a score that high.  Motivation, aptitude, other stuff inside that girl, but it clearly wasn’t just me.  When I see a student who was almost totally disengaged for all four years pull an I1 in almost every category, I want to be angry – she didn’t deserve to get that good.  But I can’t be angry.  Individual differences are powerful, and the learner is in charge of acquisition.

That doesn’t mean you can’t take some things away from it, it just means, if you can’t think of a decent reason, chances are the issue isn’t with you.  Contemplate what the scores might mean.  When I see the N2 in speaking from a senior, I know why that happened, and it didn’t have anything to do with me.  It’s that learner’s social anxiety and almost complete disinterest in what was going on in the class.  When I see a 9th-grade learner surprise me with an I2 in speaking, kudos to her, but I can also contemplate how she was the first to volunteer to participate in class and that likely played a part.  When that same learner scores an N3 in writing, I can guess it shows how our class had an emphasis in speaking and not writing, because clearly her general production ability is above Novice Mid.

By the way, as a side note, I still believe what I wrote in that post five years ago, a year before I met these girls:

Realize that by doing a good job instead of the best job you’re actually helping more people than you were otherwise.  So stop telling yourself that you’re “doing the best I can” and start telling yourself, “It’s a lie that I need to be the best.  I am being the one they need right now.”

To investigate the AAPPL and request an account so you can order and administer tests, visit AAPPL Central.

aappl actfl assessment proficiency
Previous How proficient language speakers get there, and how it changed my goals
Next The 3 silver bullets that killed my textbook