The fourth-most popular post of 2016 on Musicuentos was a post in which I detailed where I felt the agreement was among people with very different opinions in our field (and there are as many opinions as there are us!).

Where are the points of agreement in language teaching?

When I graduated from my master’s program in Linguistics with an emphasis on Second Language Acquisition, I suffered from a fundamental misunderstanding.  I thought that there was a consensus on the general principles guiding how language acquisition works, what that means the second time around, and what that understanding ought to mean for the classroom teacher.

I was wrong.  I have since come to understand that differences exist on everything from why and how to implement ACTFL Can Do statements to how and why to assess students in their skills.

If you were under the same impression, I hope that this post helps you understand and find your place on the points of agreement and disagreement among some very smart people I know, because that is its purpose.  It’s not to paint a war.  It’s not to elicit any particular reaction from conferences and workshops currently running, such as IFLT ’16, and I give you my word that the timing is purely coincidental, as this post has been in draft mode since at least April.

This post is also not intended to “call out” any teachers.  Offering constructive commentary with plenty of opportunity for open dialogue is one thing, but publicly dressing down teachers on the internet is a despicable practice that only harms our profession and is one that I do not want to fall into.  I have come pretty close to it before and I’m thankful for the friends who call me on it.  No, I want you to know up front that from one end of the spectrum to the other, from Carol Gaab and Kristy Placido, to Grant Boulanger and Martina Bex, to Carrie Toth and Justin Slocum Bailey, to Lisa Shepard and Helena Curtain, to Thomas Sauer and Stayc Dubravac and Colleen Lee-Hayes, all the way across both ponds to Steve Smith and Gianfranco Conti, all these people I am privileged to learn from and beside, I count them as professionals and friends in my highest esteem.  Ten years ago I could not have named another language teacher anywhere, and now look at the people I get to learn with!  I am grateful for how they’ve informed my positions in these areas, and this is not a war.  We don’t agree everywhere and that’s increasingly obvious to me, but the disagreement is okay; we’re all different, we serve different student populations, we have different personalities, and we even read different research in different ways (so I have little patience for X study says M, N, L, and Z and so YOU ARE WRONG).

But let’s start by talking general points of agreement, right?  Here are a couple that I think we all rest pretty firmly on without teasing aside too many specifics.

Methodologies do not look the same across proficiency levels.  But principles do.

That’s true for me, too.  My level one stories does not look like my level four input, but you will see the principles I lay out below play out in varying degrees at any level.

How about this one?

Students are expected to interact and demonstrate comprehension.

Yes! Don’t get the impression that teachers who shy away from “forced output” expect their students to sit passively.  Perhaps it’s a distinction between forced output and expected output.  As I tell my students:

Many times, the output I’m expecting (demanding, even) tells me if we have a breakdown in this process.

Okay, but there are points of departure and we can’t pretend there aren’t.  Where are they?  I’ll present six of them here in fairly quick succession.  I’ve worded these based on extensive conversations with many, many teachers, and I hope I’m faithfully representing the perspectives.  I welcome any comments that help clarify the issues.  On each image, you’ll see where I identify the agreement across the top, and then two differing perspectives on that larger concept below.  The Musicuentos M shows you where I stand on the issue.

1. Agreed: The purpose of language is communication.

If you want to know more about the distinction between learning and acquisition in a hurry check out these three resources:

2. Agreed: We want students to stay on the journey. 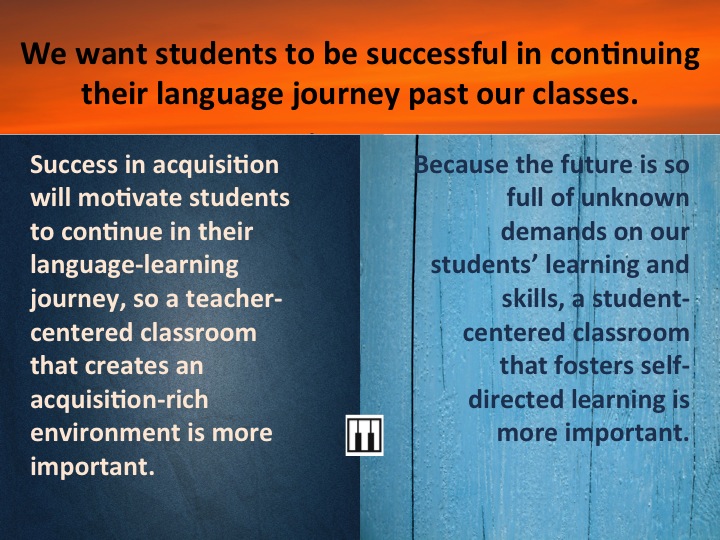 I believe an underlying goal of most strategies is for students to be motivated to continue in their personal language journey past our classes.  But sometimes an assumption is made that success in acquisition alone will motivate students to continue in their language journey, so a teacher-centered classroom that creates acquisition-rich environment is the most important thing. Martina tells us that comprehensible input is the one thing, so important that in a 45-minute class period, 45 minutes should be spent on comprehensible input.  On the other hand, general education research tells us that the 21st century will be full of unknown demands on our students and their learning and skills, so a student-centered classroom that creates innovators is vital to our future.  Where do you fall here?  I am a comprehensible input teacher (and I don’t much care if others who have never seen me teach a whole lesson believe this or not), but I have swung a great deal in to the PBL camp in the last couple of years, and now I fall about 2/3 into the creating innovators realm.  (My stand here has also been affected by how I foresee the imminent invention of the Babel fish decimating the need for learning language for most communicative purposes.) 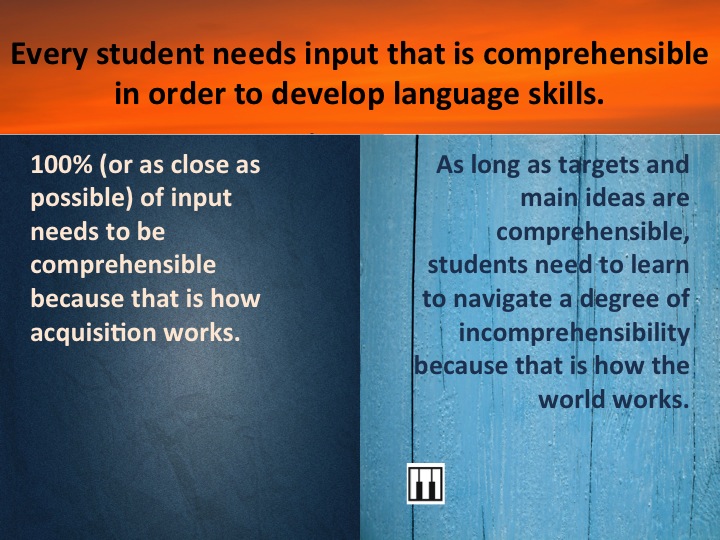 I just blogged about my personal position statement on TL use in the classroom.  I recommend you figure out where you stand on this one.  This is one of the strongest points of disagreement, and many other differences in perspective on everything from translation to authentic resource use stem from it. 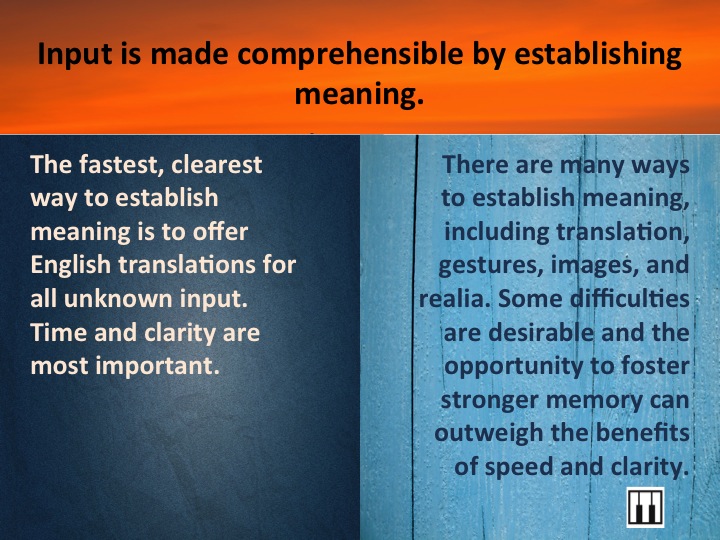 You can see I am pretty far into Position 2 on this issue.  Even though I have always been on a mission to combat the time issue, English translation is not a way I will choose to do it.  Feel free to browse my no translation tag. 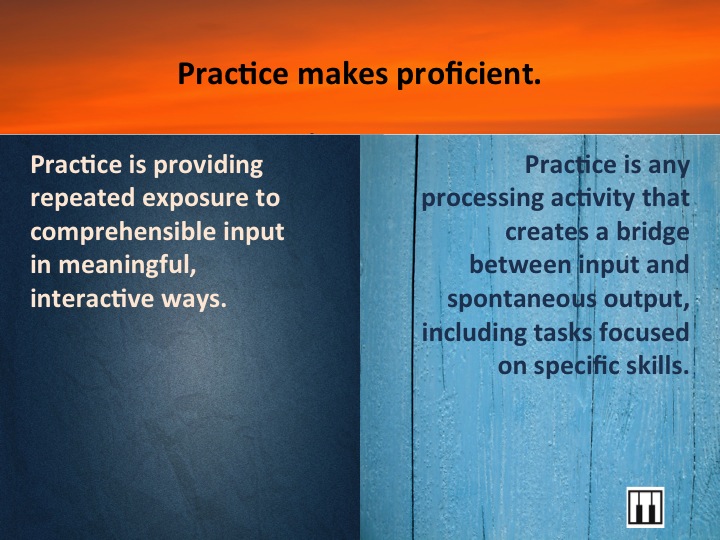 (On the agreement point, props to Natalia DeLaat for sharing the wording.)

(That left side is almost a direct quote from Carol Gaab.)

You can probably see how a disagreement on the definition and usefulness of practice has created one of the sharpest divisions in the communicative language teaching field.  In my view, repeated exposure doesn’t mean students are passive; they may respond, and I may expect (yes, force) them to respond, and that can be meaningfully interactive.  That interaction means that practice can be output, which leads me to…

6. Agreed: Spontaneous output is a vital part of a language class.

Like Grant said, students are expected to interact. But…

There is a robust and established (but not proven) position that output does not help in language proficiency gains (that’s why it’s called the input hypothesis), so requests for output should be kept to a minimum.  Check out how Justin takes an extensive online discussion on Can Do statements down a road of not practicing interactions because that’s not acquisition-fostering input.

There is another robust and established (but not proven) position that interaction does improve language proficiency, not because comprehensible input doesn’t work, but because the interactions help the speaker identify and internalize more comprehensible input (that’s why it’s called the interaction hypothesis).  Check out what Ohio TOY Lisa says, based on her years of teaching experience and interaction with ACTFL guidelines: “I have come to believe that well-designed tasks can lead to increased proficiency.”  Sometimes even in interpersonal assessment, teachers like Colleen Lee-Hayes are so committed to see what students can do to interact without them, they decide to take themselves out of the equation and simply listen.

Some conclusions: No panacea

On the one hand, here’s an oft-quoted TPRS maxim from Blaine Ray:

The worst day of CI is still better than the best day of a textbook.

On the other hand, Steve, as he points out how we really have more common ground than we think, says,

An inspiring teacher using an audio-lingual or “drill and kill” will achieve more than a poor teacher using a communicative or comprehension approach.

Who’s right?  I wonder if the answer lies in a couple of other quotes.  The first is from that same blog post by Steve:

There are no panacea approaches, there are just good and bad teachers.

The other quote is from Stacy, the one teacher referenced here I have not had personal communication with, to my knowledge.  She proudly wears the badge of “legacy teacher,” which is often, she argues, falsely confused with the label “bad teacher.”  She declares,

It all comes down to this: we are teaching students not content. Ten years from now they will remember how they felt coming to our classes and the grace and humanity we showed them on a daily basis more than they will remember whether we taught grammar, used TPRS, gave IPAs, used PBL and/or spent 90% of our time in the TL.

This all begs a question: If the common ground is so surrounded by disagreement, why did I come out of grad school with the impression of a consensus?  I think it’s because I believed and still believe that in each of these areas, nuggets of truth and application are to be mined and used in my program and in yours.  What gold are you finding these days, either on the common ground or on the sidelines? 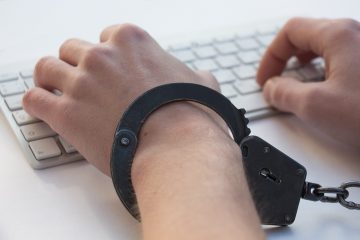 From the “icky” test to the Supreme Court: Reflections on teachers sharing (& selling) ideas November 20, 2018 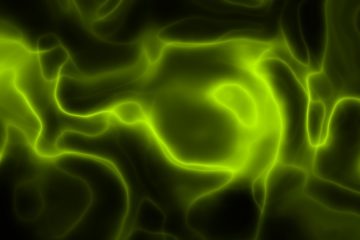 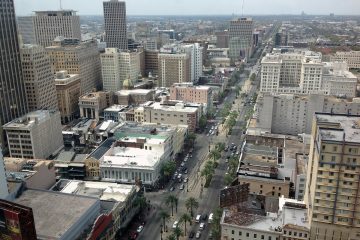 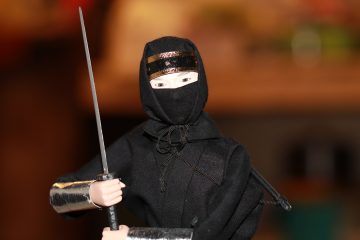