Accuracy vs. proficiency: an illustration 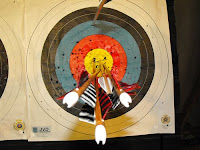 Accuracy refers to grammatical forms that match the standard form of the language. So, a student produces ‘yo pensé’ instead of ‘yo piense’ (something my 3’s have been doing recently). Proficiency includes an aspect of accuracy, but primarily refers to how well the speaker (or writer) is able to communicate and comprehend meaning. The contrast is what Cathy Doughty (confusingly) refers to as focus on form vs. focus on formS. (The distinction is necessary but this way of referring to it has always driven me up the wall- I can’t remember which is which without looking it up. Every.time.)

Next week, Ingrid Betancourt is coming to visit our local library, a super exciting event because every year for the past 3 years my Spanish 3 students have done a project related to her kidnapping and rescue. To prepare for her book talk, I got her book in Spanish and I’m trying to finish it before she comes. It’s 700 pages long. I’ve made it halfway. I just read this morning a perfect example of the importance of proficiency over accuracy. I know that as Spanish teachers it makes us cringe inside every time we hear “Me llamo es…” but read this snippet of Betancourt’s story and see which you think is more important.

Betancourt was in the jungle for more than 6 years. Not long after she was kidnapped, three American contractors were also kidnapped, and they ended up with her for a period of time in a type of jail in the jungle. The hostages bickered quite a bit amongst themselves, often targeted at Betancourt, so much so that at one point she was taken out of the jail and housed elsewhere in the camp. Then, the other hostages back in the jail complained so much that her conditions were now better than theirs, that she was transferred back. When she returned, one of the Americans, Marc Gonsalves, whom she says did not participate in all the bickering, approached her. Here’s my loose translation:
Marc smiled sadly and told us in broken Spanish, with all the verbs in infinitive form, that he was very happy to see Lucho and I again. His words reached my soul…“I can’t believe it! You’re speaking Spanish! I go away for three short weeks and you end up speaking better than me!”…Everyone laughed, because Marc answered with the three words of Spanish that he could patch together. He translated literally some English expressions that, miraculously, in Spanish came out hysterical and made us all laugh. Then he bid farewell courteously and went back to the barrack.

So, can verbs in infinitive “reach the soul”?

grammar
Previous Fun activity #6: A escribir
Next For KWLA 2011: Media from Reel to Real