Last fall, the American Council on the Teaching of Foreign Languages, together with the National Council of State Supervisors for Languages, released a newly designed, re-imagined set of Can-Do statements.  Have you taken a look yet?

Maybe not, it’s okay.  You’re already trying to use all the good pedagogy tips everyone’s been telling you about to plan the most communicative, effective lessons.  You’re trying to incorporate the latest technology and boost 21st-century skills.  With all this (not to mention a family and a personal life) on your plate, it’s easy to say, “That’s great!” and then never actually get around to taking a look until someone gets you to a PD and sits you down in front of them.  I know.  So I wanted to write a blog post that would help us at least understand some key differences in the new document, even if you don’t get a chance to really comb through it until summer.  (And wanting to write such a blog post inspires me to take that time myself!) 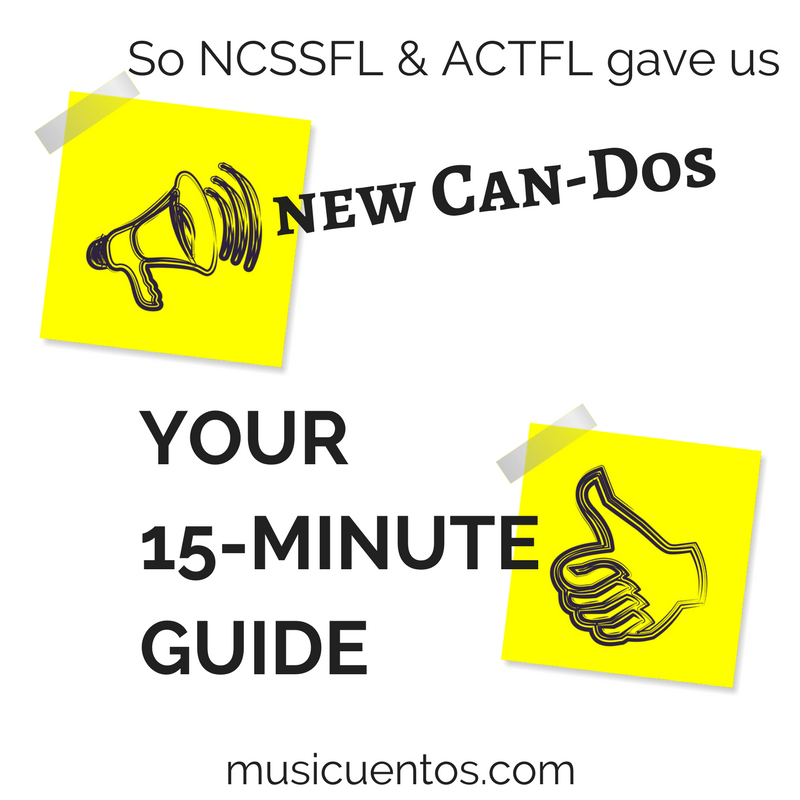 First, go read the press release.  Just up to the “About ACTFL” piece (you know that). It’ll take you about 2 minutes.

The Can-Do Statements are organized according to the Interpretive, Interpersonal, and Presentational Modes of Communication.

revisions of the previous Can-Do Statements

new Intercultural Statements, which provide a set of examples and scenarios that show how learners use the target language and knowledge of culture.

Let’s get into the heart of the new documents, starting with a couple of overall changes you must see.

But wait: These aren’t simply guiding questions.  Watch carefully: These are language functions that finally form a bridge for us between the proficiency guidelines and what we can expect in a performance.

What does that mean?  Take a look at the progression of verbs in the interpretive example above (the last one): understand, interpret or analyze.  That question is the same across proficiency levels.  Now take a look at the indicators from various levels, paying attention to the verbs. 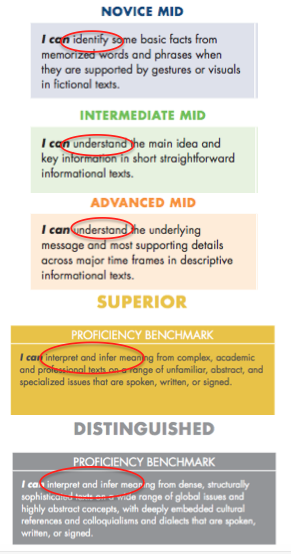 Now take a look at the Communication Standard for interpretive mode:

Do you see that?  The verbs in the questions and then in the benchmarks help us see the progression of where students are headed, tied directly to the Communication Standard! (More on this in the interpretive section immediately below, but this is true across modes.) I will say, though, that this isn’t true throughout, and this interpretive statement in Advanced Low threw me off at first:

I got distracted by the classically novice verb “I can identify,” and I got distracted thinking that the key was “across major time frames,” but don’t make that mistake with me: the key here is actually that the Advanced Low interpretive skill involves inferring the underlying message on one’s own.

But the clarity, guys.  There’s one (ONE) (ONE!!!) proficiency benchmark per level.  Let me just remind you of the 2015 document. 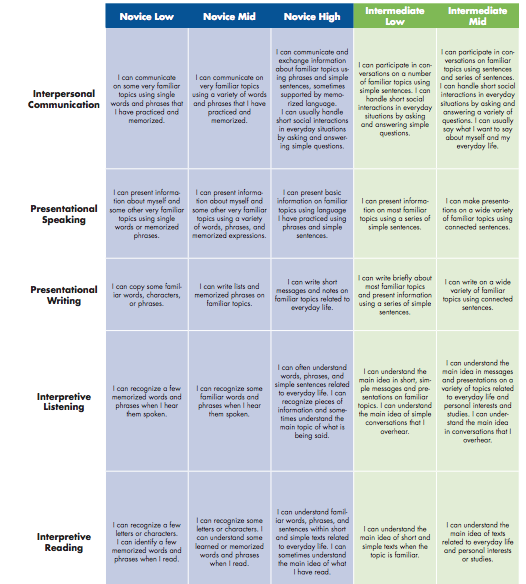 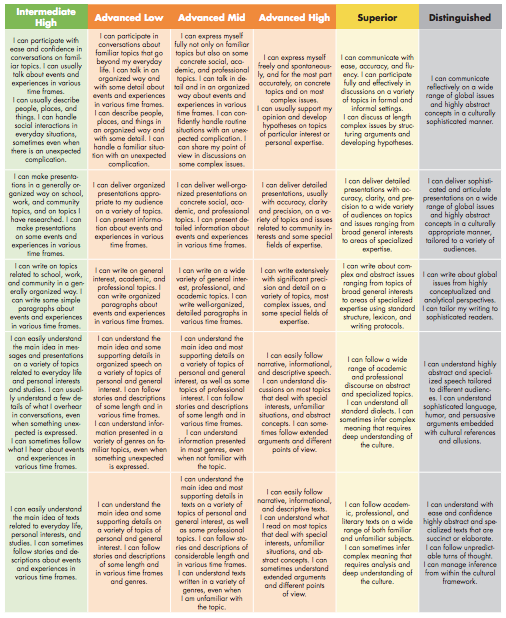 Regarding the interpretive Can Do statements, here is what stood out to me the most.

The one important word

Do not miss this.  The word authentic was in the old document exactly 4 times.  All 4 times, the word was in the phrase “culturally authentic.”  All 4 referred to language production.  One was in an Advanced High statement, and the rest were in Distinguished.  DISTINGUISHED.

In the new document, it’s used 9 times.  All of them are in basically the same question.  All of them are in the interpretive Can Dos.  And they all reveal one thing: ACTFL doesn’t intend their standards to be used to measure performance or proficiency by a student using a learner text.  Interpretive Can Dos are only about what learners can do with an authentic text.

Don’t take that as a soft (or hard) jab at learner materials.  They’re not suggesting you skip your novels or Señor Wooly.

Learner materials can be excellent for building proficiency.  They just cannot be used to measure it.

But one thing that did not seem necessary to me: informational and fictional texts are separate.  The standards are nearly identical.  In many, the only change is the word informational to fictional, until you open the samples, which of course tease out the two a bit.  The feedback I got on this point from those who worked on the statements is that language arts standards across disciplines delineate a difference among text types: informational, fictional, and conversation/discussion.  So…

I knew it! Conversation IS interpretive!

Every so often, during a #langchat about interpretive skills, someone would bring up understanding what the other person was saying in a conversation.  Our general consensus was that the interpretive part of conversation was relegated to the interpersonal standards in ACTFL’s documents.  But in the new statements, a question is included as a separate item in the interpretive standards:

What can I understand, interpret or analyze in conversations and discussions?

Before you echo my thought (We knew it!  And perhaps someone was listening in #langchat…?), this does not refer to conversations you can take part in.  Think: two people are talking to each other in a movie, and you’re not part of it.  You can’t negotiate meaning, so it’s not interpersonal.  But, you approach comprehending and analyzing this conversation differently from the other interpretive sources, fictional and informational texts.

NM vs. NH: What difference?

In my opinion, the new documents more clearly show the key difference between Novice Mid and Novice High interpretive skills.  It’s easy to think that Novice High can understand “more” than Novice Mid, but the real difference is in the size of the picture they understand.  It’s a question of isolated, basic facts vs. big picture.  Novice Mid can list basic facts from a text/conversation all day.  The time.  The location.  A random book title.  But they can’t tell you what the text/conversation was actually about.  And don’t fall into feeding even Novice Mids nothing but infographics and lists.  They can get something out of just about any text (using for assessment, remember, not input toward acquisition- the key there would, of course, be that it be comprehensible).

I’ve got one thing to highlight here and that’s the clarification of what a Novice Mid speaker can do.  I cannot tell you how many times in #langchat or a workshop I’ve been involved in a conversation about Novice interpersonal and the comment has been tossed around that “Novice High can ask questions.”  Another common one is “Novice Mid is phrases, Novice High is sentences.”  So I would take a sample and call it Novice High, and someone with more training than I would say no, it’s Novice Mid.

According to the new Can Do statements, in the interpersonal mode a Novice Mid speaker can accomplish

a few simple questions on very familiar and everyday topics, using a mixture of practiced or memorized words, phrases, and simple sentences.

Sentences can appear in Novice Mid.  So can questions.  The key words in the Novice Mid vs. Novice High decision? Very familiar, practiced, memorized, simple.  That’s in contrast with the original ones a High can come up with as (s)he reaches into Intermediate Low’s consistency in that skill.

I’ve focused on one particular change here as well.

Watch what happened and don’t miss it: in the new documents, there’s no difference noted between speaking and writing until you find the samples. 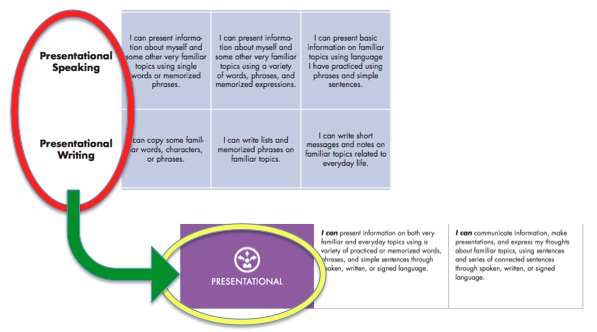 In all our discussions, we knew there wasn’t much difference between speaking and writing in presentational language, beyond pronunciation vs. orthography.  The new statements show that.

I do wish there were some language to further delineate the difference between interpersonal and presentational modes, since that topic comes up so much in #langchat.  The statements contrast conversation with present information, and if we think hard about it we can understand that means differences in whether you expect a response, or whether you can negotiate meaning.  But teachers usually also have questions about how much preparation time divides interpersonal from presentational.  Is one always spontaneous?  Is the other always (mostly) prepared?  Or is that irrelevant?  We still can’t tell.

Of course, this is a major change that was greatly needed, a huge increase in the amount of real estate intercultural competencies got in the document.  Here are some keys to note.

First, it’s intercultural communicative competence.  ACTFL is a language organization. This section is about how learners can show intercultural competence in their language, not in what time they show up or what clothes they’re wearing.  They can be really competent on the cultural side, or really competent on the language side, but either way, this set of standards is about where the two intersect:

Second, the three Ps.  These statements focus on how a student can interact with

products and practices to help me understand perspectives

Now, what can a novice do in investigating these? Identify them.  An intermediate learner? Compare them.

What about when trying to interact and show intercultural competence? The novice learner functions with rehearsed behaviors on a survival level.  The intermediate learner shows learned behaviors on a functional level and can avoid “major social blunders.”

In some of these benchmarks it’s unclear how this isn’t simply another language standard, until you get to the indicators.  Then, you can see they’re referring to showing basic cultural awareness and some interest in cultural issues.  And it’s so helpful to have the examples.  Many of them you could drop right into your exising units (though remember, they’re not a checklist!). Here are a couple:

Just kidding: This whole post is a TLDR for the statements. If you skimmed it, work on your attention span and go back and try again (wink emoji here).

Many thanks to Thomas Sauer, Dori Perugini, and Paul Sandrock, who all helped work on the new statements and gave me a lot of insight on this blog post. 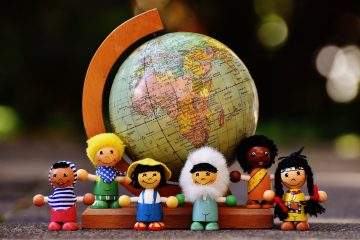